This studio espionage business is going well. We have conquered every backlot in the city. That said, you’re only as good as your last trespass.

My friends and I are no longer completely afraid. Courage allows temptations to be fulfilled. We become particularly efficient at exploring MGM’s Backlot Two. The closest lot to my house and the lot I can see from my roof  and hear from my bedroom. The lot that piqued my interest as a tiny boy… as well everyone who lives close by.

This is mainly because of the gunfire and noise from Combat, the Vic Morrow TV series. Sounds cannot be contained by the hole laden wood fences. You can hear directors shout on megaphones. Smoke plumes rise above the fences, explosions happen daily it seems…

Like Gumbo soup, there is so much flavor in just a spoonful. There is so much to explore in each quadrant or village… and there is no hurry… We are kids and we have our whole lives ahead of us. It appears this place is not ever going away. The key to this magical future is not to be captured.

We know to look out for a red Ford Bronco. We soon learn its sound and often hear it coming before we see it. It is then that we hide behind the closest prop or doorway we can find.

We were almost captured early on, and it may have derailed our train. But my friend Jimmy and I cleverly hide behind a curtain covering a window of a building with no backside.

We heard the engine groaning as it was getting closer. Our options are to run or hide. We chose the latter. Problem was, we were exposed from knees down. Four knees, two sets of tennis shoes.

Vrooom, the Bronco speeds by, five feet away. The guards’ window is down, his arm is hanging out, and from his hand hangs a snub of a cigarette. We are afraid to breathe. As quickly as it began, it ended… in a cloud of dust!

Success! As simple as hiding in plain sight. This simple childish moment helped strengthen our belief that we are capable of dealing with this place and its security.

We leave this set, which we nicknamed the “watermill house,” due to a large water wheel paddle that exists on the front side of this structure at Johnny Weissmuller’s Tarzan lake.

We then head towards an enormous warehouse with a large rocketship that catches our attention. When we arrive, we find a large ocean liner inside, amongst a million other props. This is like an adult’s toy chest…

This ship is adjacent to the warehouse and doubles as a ship dock. This area alone will take a lot of time to explore. A very dusty space capsule for two sits next to a flying saucer. Possibly, from my Favorite Martian, TV series, starring Bill Bixby.

Next to that, a submarine coning tower that has an identifying tag for the last movie it was apparently used in, reads Ice Station Zebra. We found this document inside the tower: 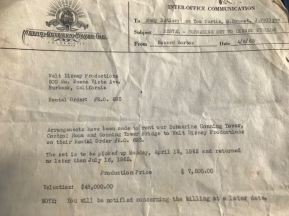 My first visit on the backlot presented me with a gift: a WW2 helmet from Combat. I returned home so proud. An annex is built into this large structure that we are exploring and the door is unlocked. As we peek in, low and behold!… hundreds of army helmets, German and U.S.! The upper floor had army wardrobe! There’s enough here to outfit every kid in the school…

But what I must have is that blank ammo cartridges that are lying next to the army jackets. The same ones that were used in gun battles that I have heard all my life. I quickly put on a army jacket and began stuffing clip after clip into my new army fatigues.

Not sure how I’m going to use this ammo, yet! I will figure that out when I get home.  Satisfied with that, we climb the nearby fence and walk down the train tracks dressed as soldiers. Jim and I feel like we our part of Combat.  We have earned some stripes anyways.This evening, we walk proudly down our street in full uniform, for all to see…

Now when we play army, I have uniforms and ammo for an entire infantry! MGM does not realize yet that a young Phantom exists amongst these props and false fronts.

So much more to explore…

Written and lived by Donnie Norden…