My friends and I have an advantage at this lot in that we can see in everywhere. Chain link fences with vicious guard dog signs surround the lot. Baldwin Hills provides a balcony seat. We do a small hike before sneaking in and see what obstacles await us.

Most importantly, the dogs. We have seen a pattern: the dogs do not roam, they have a guard handler. What this means is, we are just hiding from a guard. The dogs come in “to play,” if security sees you. He won’t catch us, but they may. Precision stealth is required. I am getting good at this stuff.

In the past, I saw Batman and Batgirl. Both were filmed on the street right outside its main lot on Ince ave. One late afternoon, the main gate was open and grips were moving a large set of giant, studio-crafted clam props that were to imperil the caped crusaders. I won’t ruin the ending but…

The workers saw our amazement with this huge set of clams and let us run in and check it out. Well, for a kid that wore a cape and mask as I rode my Stingray bicycle from lot to lot, this was too cool to be true. I even clothes-pinned playing cards on to my spokes for sound effects. We were told that this episode will be on in about four weeks. Every episode is two parts. When it aired, Jimmy and I were the only kids on the block to be able to say, “I was inside those clams, too!”

Through the chain-link backlot fence, I saw the Bat Mobile drive by, and I got chills. Ironically, in the future, this Adam West, Burt Ward series turns into a billion dollar enterprise.

Guess what… I worked on three of these blockbuster features, as time went on. I was the only guy on the set that could say he saw the the original series in real life. 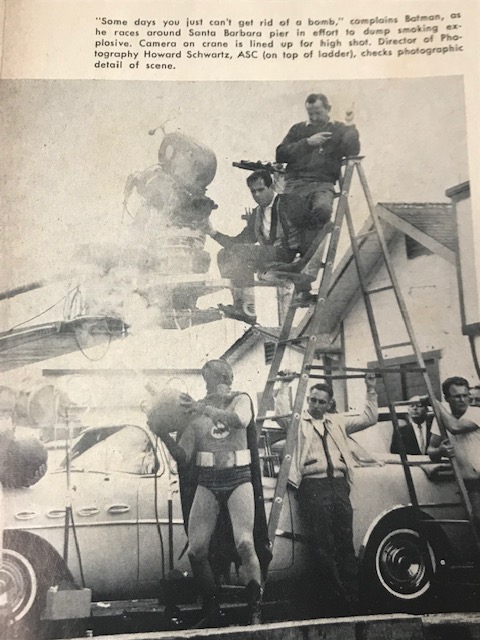 The Desilu backlot still has sets used on this TV show. As we enter, this show is no longer on the air…

We will enter from the La Ballona creek today, after previewing from the hills above. It is a Saturday and no filming or anything is taking place. Jimmy and I climb up the creek cement embankment and peer through bushes at Gomer Pyle’s Camp Henderson. So close we can taste it. It is also the closest set and… heck, I like the show. Especially, Sgt. Carter.

We duck inside the barracks where there are lockers and cots inside. A flag pole sits motionless out front. We recognize everything from TV, but also because we have been looking down on it for years from the hills. Separated by fields and trees is another camp we have already conquered… Stalag 13.

The next move from Camp Henderson is to run to a small rural gas station. It is  Wally’s service station. The same one Goober and Gomer worked at in the Andy Griffith show. Gomer has his old set right next to his new one. In fact, Gomer Pyle Transportation Dept. parks their army trucks in front of this set when wide camera angles catch this.

The gas pumps and soda machine sit here like they could be in service. As we check inside, we find they’re empty…Too bad, this trespassing stuff makes a boy thirsty.

A couple of pits adjacent to this station catch our eye, only because when we found them, it triggered a memory. Opie played in these in an episode. That’s good enough for me. We jumped over them and climbed in them. Not just any pits… but, famous pits.

Anything can be fun here!

We are certain no one is here, so we are covering ground today, taking advantage of this gift. We briefly explore a cantina, or village, Spanish style. When you exit certain doors, you find yourself on Western Street. Ride Beyond Vengeance, starring Chuck Connors, was filmed here, as was major shootout in the TV series, The Untouchables. The episode to see is The Alcatraz Express. They blast this street with Blazing Tommy Guns. a blazing.

When you are standing in these exact spots, you don’t want to move. Just soak it all in. Listen close and you still hear the gunfire. You are here, and here has been captured for eternity, on film. I love these backlots… so much history.

We know everything will be on sale soon, as greed and poor planning will replace the irreplaceable. A parking lot will soon replace paradise. For now, we pray for this not to happen.

We are trying to cover a lot of ground and we have made it to Gotham City, which is also Mayberry… which was also Chicago street for the Untouchables. In the early sixties, Elliot Ness would shoot this street up on their scheduled backlot film days, then “One Bullet Barney Five” would be on patrol on Andy Griffith. The property dept. just moved props and signs around.

Amazing what can happen in 24 hours around here.

A parked blue truck catches our attention… a guard is walking around by the big church on the end this street. He is alone… no dogs that we can see…

It’s time for these crusaders to back track outta here, I have no more tricks in my utility belt.

Written and lived by Donnie Norden…