This warm summer afternoon has brought me back to the site of my romantic encounter just two evenings earlier. The barn, still fresh with Maureen’s fancy perfume scent and some Bit-O-Honey candy wrappers littered alongside a couple of empty Bud Talls. She had no idea I’d be able to bring her book to life.

I relive the moment fondly as I move on… I cross the dirt street and head into the saloon. I then swing the doors open and to my surprise… we’ve been boarded up! Plywood blocks me from going upstairs to my office and my phone! It appears we’ve been Cancelled!

It appears Hole in the Wall productions no longer has its offices here. My suspicions are confirmed as I climb in through a side window!

Well… doggonit… don’t that beat all… what in the Sam hill is goin’ on here?! No more casting cots, no more bar stools, and most importantly… no more world-wide direct phone line! Just empty whiskey bottles and the dreams they created!

Not one to be deterred, I resolve to spend the rest of this afternoon looking for a new office space. I am moving east into Mayberry, away from this huge Warren Beatty/Jack Nicholson feature, The Fortune, that has taken over the west half of the lot. Its set is bigger than Stalag 13 and has encroached on my territory.

All is well. I’ve found a new potential office in an iconic old house. Andy Griffith’s house will work fine for now. We just don’t have a phone. But, I’m on the lookout for one of those rolling phones.

I decide to take over the entire upper floor. This was once Opie’s bedroom, but with its perfect view, overlooking the big church steeple across the street, and Baldwin Hills in the background, I consider it a fine space for an office. The steeple would’ve been suitable as a fort, but it’s too exposed and you could easily get trapped up in the belfry, if seen. Besides, a four story strait ladder is dangerous.

Andy’s courthouse gets scouted but is too exposed, as well, from the backside, and does not fit the bill. But his house does fit and people say I look like Opie, anyhow. One way up and six ways out makes this a desirable location and guarantees escape, if need be.

I will decorate more with Jimmy, but for now, I grab a chair and a sign that says Mayberry Courthouse and make the short walk from the sheriff’s office to his house, with these two items in tow. 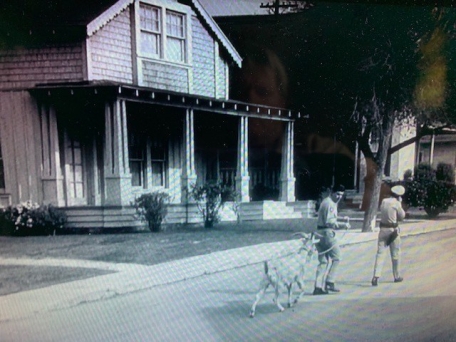 Hole in the Wall still has a pulse… stay tuned!