The long black Mercedes-Benz comes wheeling onto the set, sending up a cloud of dust as it grinds to a stop. Everybody stares at the car, waiting for the great man, the producer, to emerge. Even King Kong stares, impassive, his giant ape face frozen 40 feet above the car. After a couple of seconds, no doubt for dramatic effect, the producer, Dino De Laurentis, bounces and flounces out of the car. He pays absolutely no attention to the rest of us on the set – maybe 200 people. Looking up, he locks eyes with King Kong. Hs is here to see the giant monkey. De Laurentis doesn’t even glance at the maybe three dozen special effects people who are swarming over Kong. Several of them take up positions at big instrument consoles, each console with a series of levers that control hydraulic valves within Kong.

Slowly, gradually, we hear the hum of electricity. Then the whoosh of valves. Kong is coming to life. Maybe. De Laurentis has come to see the beast move. And it better move, and move well. The Hollywood press has been hinting at problems with the giant hairy star of the movie, and there have been rumors that the whole movie is at risk. And that is no small risk. It is 1975, and the $30 million budget for “King Kong” makes it the most expensive film in history to that point. Many people in Los Angeles think De Laurentis’ remake of the 1933 classic starring Fay Wray is a folly, both because the original is such an iconic movie and because no movie should cost $30 million and depend so much on unproven, untried special effects. Giant jungle robots, indeed. And many movie insiders in ultra-competitive Hollywood are taking not-so-secret delight at the prospect of seeing De Laurentis, the flamboyant Italian interloper, fall flat on his face. De Laurentis is in the process of relocating to the United States after a career in Italy based on spaghetti Westerns and niche films such as “Barbarella,” and derivative, knockoff spy and gangster movies. To some, De Laurentis is altogether too big for his riding britches, and re-making “King Kong” could be his Icarus moment, when he flies too close to the Hollywood sun.

De Laurentis is looking less than cocky at the moment. He looks worried, his eyes never straying from Kong’s as he stands a few feet from his car, waiting. He doesn’t speak. He doesn’t need to. Men scramble, levers are pulled, hums and wheezes and whooshes get louder. Is the big ape going to come alive for the big cheese?

Kong’s ears wiggle. There is a murmur on the set, but nobody shouts or cheers. Nobody says anything. Everyone is concentrating so much on the big robot that I can step out of my hiding place. I am only 15, and I am not supposed to be anywhere on this studio backlot, much less here on the tightly closed, high-security set of the biggest movie ever, during this critical special effects test. I am about 20 feet from De Laurentis, to his side, next to the jungle scenery that has been my hiding place.

Kong blinks, slowly. This is promising. But the robot needs to be able to make much more complicated movements with its arms and legs. He must look real – and huge, and mencing – on the screen. If Kong moves like a robot, the movie will be not only a flop, but a laughing stock.

Slowly, Kong’s left arm rises, a little. He blinks again. His head turns left. His head turns right. His partially raised left hand is in a fist. Slowly, the ape’s massive fingers, the size of a stocky man’s legs, start to unfurl. I sneak a quick glance over at the Mercedes, and De Laurentis is starting to smile.

Kong raises his left hand higher, so his hand is chest high, palm toward his chest. I suppose if you know how a 40-foot gorilla would move, the robot’s movements look pretty natural. Kong extends all four fingers and his thumb, so his palm his facing his chest. Amid more wheezes and whooshes and buzzes, slowly Kong folds his thumb in. Then his pointer finger, ring finger, and little finger. His middle finger remains extended.

The set erupts in cheers and shouts and laughter. People clap, and so does De Laurentis. I’d like to say I remember De Laurentis shooting the bird back at his creation, but I’m not sure that actually happened. It’s one of those things that should have happened, and sometimes we remember that instead of what really happened. No matter. That was the moment it became clear that the “King Kong,” remake, this time starring Jessica Lange in her first film role, along with Jeff Bridges, would become a mega-hit when it was released a year later, in 1976.

A Coming of Age Story—

That was also one of many memorable moments – and some not so memorable, for a variety of reasons – during my years as a mostly invisible and totally illegal presence on the backlots of Hollywood. MGM, Desilu, Universal, Disney, Warner Brothers – I was on them all, usually several times a week, through most of the 1970s. The studio lots – especially MGM – dominated my growing up, from pre-teen to adult. In this book I’ll describe how exploring the back lots and sets led me to fall in love with movies and moviemaking – not the stories or the stars, but the actual nut and bolts behind the scenes. For me, the back lot was the star. On TV, everything is so small, yet on the back lot, everything is larger than life.

Actors and specific movies came and went, but the back lots were constant – every-changing, flexible, but constant. Mayberry could transform, with some tweaking, into 1930s Chicago. My pals and I were soldiers in WWII villages, cowboys on the dusty streets of Tombstone, and pirates on the Bounty. On the rare occasions when it rained, we danced in Gene Kelly’s footsteps in “Singin’ in the Rain.” I had a years-long running battle, a cat and mouse game, with the security guards at all those backlots. My success at eluding them earned me a nickname in the guard shacks – the Phantom of the Backlots.

From that first time I poked my 10-year-old head through a hole in the tall fence surrounding the MGM backlot near my house in Culver City, I became intrigued, maybe obsessed. I began a coming-of-age journey through the studio back lots and through movies and TV shows past and present – the history, the romance, the fantasy, and how it all looked real. People watch movies to escape everyday life; it became my everyday life.

This is not only my story. It’s also the story of a major chapter in Hollywood history – the demise of the traditional, powerful studio system. As I explored them, the lots were literally being sold out from under the moviemakers – and me – as takeover specialists swept in like vultures, picked the studios clean for quick investments, and then spit out the bare bones.

But it all started that one otherwise ordinary day when a tree fell and created a gap begin enough for a boy to get through, and pull in his bicycle behind him. 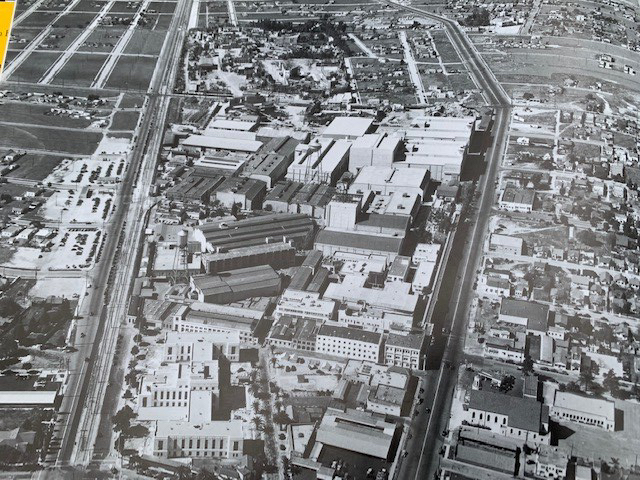 This picture shows MGM’S Lot 1, Lot 2, and surrounding neighborhoods. My street and house sits at the top of this picture.