This sign was the official warning. Often, this is where my friends would drop out, in fear of retribution from both security and Culver City police. This is truly where the rubber met the road. It took a few years of walking along this fence line and peeking through small holes, before developing the needed courage to enter. It helped, when a tree had fallen, crushing part of the fence and inevitably exposing more of what was previously hidden…more of what seemed like a veritable wonderland, within.

My friends and I were doing our due diligence…preparing, so to speak, for when our courage would match our opportunities. This included riding around the fences of all the MGM backlots, and even Desilu and its legendary 40 acre backlot. We could go up in Baldwin Hills and its oil fields and look down on these lots, like a balcony seat.

That created more anxiety…these places and sets looked like adventure lands that needed to be explored. The studio calls that Trespassing. Their fences could barely contain these spiraling landscapes and cities.

We could see Mayberry through a chain link fence. We had seen the Bat-mobile drive by this exact spot before. Every corner revealed something we recognized from TV. The Hogans Heroes’ guard towers peeked above the fence line. BEWARE OF DOGS was posted on the rusted old Desilu chain-link fence, with a picture of a vicious shepherd’s mouth, for good measure.

These were obstacles to overcome. Each lot would have its unique challenge and personality.

This would all lead up to the 1973 made-for-TV show, Phantom of the Backlot, which is eerily similar to my story. But, the lot wasn’t big enough for two phantoms!

Excerpts, pictures and call sheets will be shared on upcoming blogs. This took place over a fifteen-year time period. The story begins in the early sixties, and was a slow-growing attachment. The backlot was in every one’s life, especially for the people who lived behind it, and the entire city population, in general, could not help to wonder what’s inside?

Living as close as I did, I could see the tops of villages and the catwalks beyond, from the top my avocado tree. WWII was a block away, gunfire was continuous all day long. The hit series Combat, Garrisons Gorillas, and The Rat Patrol were at one time or another being filmed.

The Rat Patrol had a fleet of transportation that sat parked on the backlot when not in use. We had the two jeeps that Christopher George and the good guys rode around on. They had 50 caliber machine guns on them. The Germans had a half- track, a tank, and troop carriers. These Desert camouflage vehicles were attacked and blown up in every episode, but damage was never more than a fire, boom, and smoke. It was easy to repaint so it was ready to be attacked in next week’s episode.

Buckle up and hold on, these are the types of stories you’re about to read in my blog. The lunch pail I carried while riding my bike to St. Augustine’s school every day had The Rat Patrol on it. This same lunch pail has also been with me on the backlot, inside these actual vehicles. So, pack a peanut butter and jelly sandwich, some chips, and climb on board…

I lived my lunch pale, every boy’s dream… 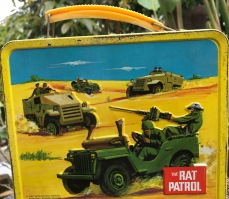