At nightime, the German village on MGM’s Lot 2 appears eerily haunted. Silhouettes with different shapes are very familiar to us, since we now know this lot inside and out. A castle top, turrets, and a church steeple, sit atop a hill, with cobblestone streets going in three different directions.

Tonight, it’s just me and Danny, my good pal. He is a year older than me, and loves to fish, which he does often at Tarzan’s lake. Usually that includes frying a batch of crawfish, also, which I’ve seen him do.

We are perched inside the church steeple in German village, with the many owls I often see up here. The only thing moving on the lot tonight is the Bronco. We are able to make out that it’s none other than Bronco Bob, the same guard that once shot at my friend, Pat, in a chase last year.

We decide to just sit inside this old steeple and watch the Bronco patrol the lot. It’s completely dark and the Bronco gives itself away easily with its distinctive headlights. Street after street, dirt road after dirt road, village after village, we see these headlights advertising Bronco Bob’s whereabouts. A simple, methodical, and ineffective way to patrol, if you ask me, but I’m just a kid. 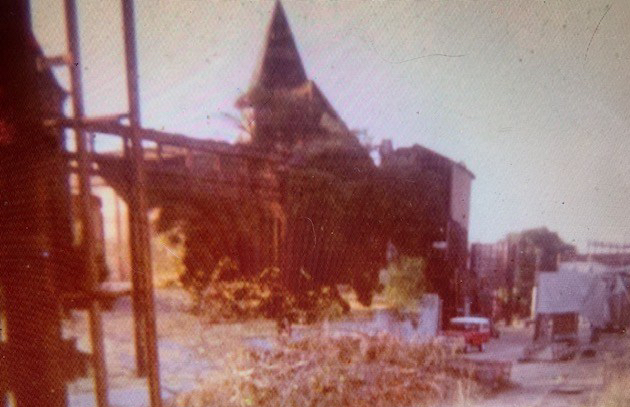 These chic cigars have given me quite a buzz, so I decide to play with my brand new Buck Knife that I just bought at Big 5. I pass it to Danny, as we sit at the very top of the church, and he drops it… Four stories down she goes, through a tree below us, and right smack onto the pavement. We decide to climb down to look for it, then leave.

We cannot find it… it’s too dark and we can’t use lights of course, with Bronco Bob on duty.

I’ll just have to get it tomorrow after school, I think… in the daylight.

I go straight from school to MGM, without any stops in between. I want my brand new shiny Buck knife back.

I find it right away… while wondering how I could have missed it. With my knife in my hand, and my school books on my back, I climb back out to civilization, at the train station gate. This is the moment that will forever change the rules of this cat and mouse game. “Big George,” the giant hired to capture me, “finally gets his kid,” the caption should read. And I practically jump right into his arms.

I figure he must’ve seen me while he was driving down Culver Blvd. And to add insult to injury, he is off-duty! He cuffs me, and throws me in his econo van. Quickly, as if he had a siren, we charge through the East Gate, on Lot 1. He slows down, once we pass through the gate, just to show off his prisoner. We tour the studio so everybody can have a look. I’m humiliated! Ohh geeze, there is Chad Everett, I look away, not wanting to be linked with security, in case I see him again. What’s more embarrasing, George looks like a slob in his dirty white T shirt.

I am finally ushered into MGM’S main security department to meet Captain Jolly. They now interrogate me under a bright light, and search my school bag. They list a million reasons why I should not play here, then call my dad, who is very aware of my studio double life.

He arrives shortly to pick me up. I’ve been released… no jail, no harm, no foul. But MGM now has what they want: my address…

What this will mean in the future is this…I imagine, is chases will no longer end just by jumping the fence; they will now end at my house!

I live a block away from George… Lucky Me.

The ride home is silent, my dad is the quiet type. He played his part of concerned parent good enough. I’m pretty sure he is aware this charade is more bike than bite. But right now, we agree to agree, I’ve done wrong. Finally, one last prop is taken out of the security closet in MGM’s police headquarters. Props are stored everywhere in this studio, a large iron bar gets dropped on the interrogation table, an echo or extended ring adds to the drama. In a display to frighten me off forever, I am told this fell from a rooftop, narrowly missing George himself and possibly killing him.

Save the drama for your next TV pilot, I don’t believe this happened, I think to myself.

We all sit in silence as the depth of this example takes hold, my next thought, a silent one is-did I almost kill him?…I do spend a lot of time on rooftops…he is a big target. Just because I hit him with lemons one night doesn’t mean I want to kill em! I have no verbal response, this is a moment for silence. I may need a lawyer. The studio is trying to send me a message, the same one my mom says as I run out the front door of my house everyday…”Donnie-Just be careful!”

I am released finally, and my dad can’t wait to fire up a Marlboro as we walk to exit out the east gate. I introduce him to Ken Hollywood as we pass the guard shack, as famous security guard at this studio who reminds my dad “He’s a good kid”

“Thanks Ken , see ya guys next time!”