So far, 1974 has been magical. It picked up right where ’73 left off. TV show after TV show, movie after movie, my event calender has been very active. I barely have time to go to school…

Due to my unique and unusual hobby, I have become very popular when on campus. My English teacher and I have become very good friends. She is a very special grown up to me. She knows I’m different, and so is she. She says I remind her of her boyfriend, who she offers up to meet me. He is an inmate at a local prison…Terminal Island.

Well, I am flattered, as I accept her invitation. We agree to take a field trip after school, just me and teacher… in her two-seater 914 Porsche. Feel Flows, the Beach Boys classic, plays from her Blaupunkt radio.

As we speed cross the the the large green Vincent Thomas Bridge, I can see all of Long Beach in the distance. As her hair blows in the wind, Debby points, “that’s where we’re headed… that prison over there!”

We arrive on this minimum security island… All Along The Watchtower, by Jimi Hendrix pounds inside my head, as we pass underneath a real watchtower. Debbie, dressed in very tight blue jeans and a tight black sweater, clears us for a visitor entry. She looks mouth watering pleasant. Once inside the facility, Terminal Island turns into Temptation Island. For most male inmates, anyway.

Inmate 13 has entered the room. A handsome all-American type that must be extremely popular in here. She introduces me to him, as then she leaves the area. I was not expecting to be alone with a prisoner.

Inmate 13, in his Orange jump suit, sits across from me. I’m wearing jeans, a sweatshirt and tennis shoes. We begin by discussing Debbie, our only common ground. He asks, “so, where do you know her from?” I respond, “she is my teacher, we’re on a field trip”…

“How about you?” as I stare back at his shackled arms… “I’m her boy friend, or was, until I was extradited here!”

Our eyes lock together… a stone cold silence takes over the room, at this moment… he then continues… “I was framed and I am being charged with importing cocaine from Brazil in aerosol cans!” Well I’ll be dammed, this guy is bad ass! I think to myself… even though, everyone in here probably thinks they were framed!

I realize this is not the scared-straight moment that Debby was hoping for… I’m actually impressed by #13 in orange… friendly exchanges conclude my first ever prison experience.

This guy has it all… looks, charm, an international business, women in Brazil, a woman in Manhattan Beach… Debbie… and a Federal Trial he is sure he can win, based off his extradition process being flawed. Now, he has a 14 year old fan. I see what Debby likes in him… and in me. Bad boys bad boys whatchya gonna do… 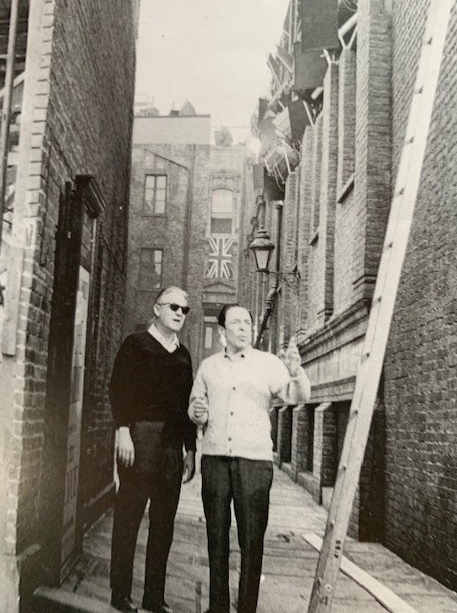 I take this experience to the Desilu backlot, as Debbie drops me off… to process this  meeting I just shared with inmate 13. I sit on the stairs under a sign that says Sing Sing Prison… Ossinings, New York

This is a maximum security prison set used in the Untouchables, that sits alone, as it towers above an isolated corner on Desilu’s back 40. I like to visit sets that pertain to my mind state… It’s cool that I have my own prison to wonder in!

Heck, I have a whole world to wonder in…

I have forts… or offices, at two major Hollywood Studios. I have produced an 8mm movie on this lot. Warren Beatty and Jack Nicholson are filming a blockbuster next to my saloon, where my World Headquarters for Hole in the Wall existed.. until we were suddenly canceled.

I recently met MGM’s most iconic and dynamic duo, Fred Astaire and Gene Kelly. I just saw Frankenstein roam the backlot. I have been on the set of Medical Center and have seen Chad Everette, up close, multiple times.

And the sets I have seen in the same time period are just as impressive… from the ancient past or the distant future… they are created for every mood and occasion.

I am strategically hidden most of the time, by a bush or a wall, but always just out of frame. I’m not famous… yet, to anyone who knows me, I’m… Almost Famous!

Check out theglamourtram.com on WordPress. Just launched, based off real events.