As the clock strikes midnight, me and my mob exit this old train, single file onto its loading platform, under a crescent shaped moon. Two owls follow our every move. The first stop on this journey tonight is the depot itself, huge by any standard. It gives everyone a chance to see what’s inside this facade.

Inside is a false ticket window, with a giant clock above. Let’s just say I really haven’t begun the tour yet. But everyone OOOHS and AAAHS, and I can tell already, that tonight is going to be different than most.

As we step out of this cavernous building, we see Maureen’s new residence. How perfect… it couldn’t be better placed. This can work well for us, as her bedroom is conveniently overlooking the studio… peeking right over the fence, back at us. This is one swanky, fancy apartment, strategically placed with a movie studio view. I am fortunate to have such an oasis so divinely placed, to go with all my forts.

It’s midnight at the oasis… send your camel to bed.

Bottom window, left, is Maureen’s bedroom window. Just her, her mom, and her pet Goldfish.

Things keep getting better. Everyone walks close to me, as I highlight each path we take, with bits of MGM history. We pass through Piccadilly square, complete with old red phone booths.

“Romeo and Juliet was filmed across the way, as was many Combats”… as I point.

I am now cruising in the middle of the night with people I barely know, and some smell really nice. It is going well. No Bronco…. yet, anyways. Mind you, being on the backlot at night is like being in a foreign country. Signs are barely visible and usually not in English. If it’s your first visit, you have no clue where you are at.

Behind this square you can make out the Great Wall silhouette, with a shanty Chinese street in front. Part of my crowd wanders on their own, to an igloo, completely out of place by the Great Wall. It is as if they have never seen one before. 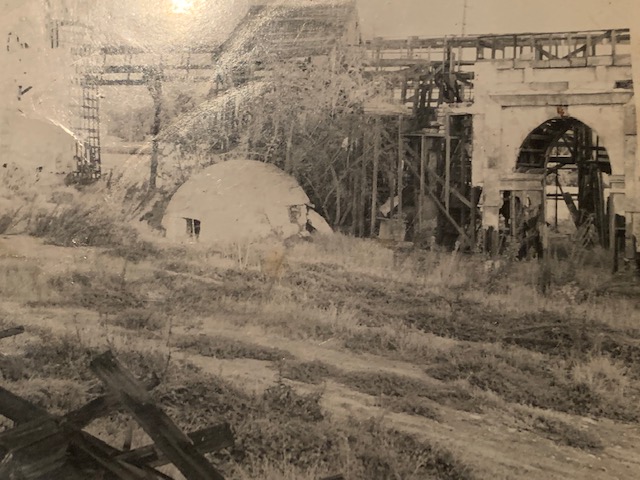 We continue on into German village as my group stops on a cobblestone street, center of town, just below the church. My guests have never traveled so far, so quickly. Like a time machine…

We cut through small town square, methodically. I recommend that they do not wander away, as I am not entirely sold that we are alone. We make it to New York Street, particularly, 5th avenue. The sight of all the great MGM musicals. It is enormous, long, and empty. This place trips me out, as it is doing to my group of 16…

The path walked this night…

I did a head count… names I will remember, some other time. Six are girls. We walk down the center of Manhattan, looking up at these five story buildings. We have been spotted. The owls are tracking us, as they fly from catwalk to catwalk that surround New York City.

I lead them to a wooden front door that appears very official, and on it is a big sign that says: Public Library. “That sign was put up for Soylent Green,” I tell the guests. Everyone reacts as if they have seen it at the theaters… good for MGM. I tell them what it was like to be here… “You see the scoops dumping people in trash trucks and Charlton Heston being hunted by Chuck Connors in a chase that starts right where your standing!”

I own this crowd, like a teacher in a class room. I point out this exact doorway and its steps, which lead up to where we are. The Blackboard Jungle—starring Glen Ford, Sidney Poitier, and last but not least, my idol, Sgt Saunders—uses this exact same angle. This is a very troubled Public high school. I will be in the same school next year, with these folks. My group is congregated very similiarly… we are in the exact, same area, where groups of school kids gather, in that 1955 Richard Brooks classic.

This building’s backside exits to a large steel hangar used to store large, valuable props such as airplanes… real airplanes.

There is A hole in the wall, which we of course, made, to go inside this locked building. We leaned a wall against it, to hide its existence. Walls are easy to find here; it is where they are stored, along with stairways and fireplaces, just waiting to be reused, like socks.

Well, 16 people follow me inside, one at a time, by squeezing through this long, narrow passage. It is extra dark inside. Only skylights allow what little moonlight we have, to come inside. Large aircraft stand out, as your eyes focus and adjust.

These planes are separated in sections allowing the camera and equipment room to set up. We have two jet cockpits, completely real. Fuselages are behind the cock pits, separated by just 10 feet of air, behind the pilots’ chambers. I point out that these were used in Twilight Zone, the one with William Shatner, where he sees a monster outside his window. Also, the episode where the plane goes back in time.

My audience must feel like they landed in the Twilight Zone. They should… my favorite prop inside here, is the Time Machine, from the episode titled Execution. I lift the plexiglass door upwards and step inside this capsule…

Time Machine above… It sits on a platform that has wheels, so it easily moves.

Everyone is intoxicated, literally and figuratively, as couples make thereselves at home in  first class. Plush reclining seats make for comfort, in what is a jumbo jet’s first class seating. A winding stairway next to the stewardess’ food prep area takes you above this compartment.

At this point, people are everywhere in this hangar, and music is playing on someone’s little boom box.

The party we left in the crest is now in full force in this large pleasure hangar. Couples are making out in first class. I pass through, like the captain just looking forward, as I climb into the cockpit. Hell, someone has to fly this thing. Tim follows me inside, and sits copilot alongside me.

As I pull the levers back and forth, and pretend to fly, I am already high. Tim lights up a joint, one of several being torched right now, inside this hangar of ill repute. Tim also unfolds a paper as I stare ahead, occasionally looking at him, on my right. I’m in my moment…

But, Tim’s moment is about getting high, in a different way. Cocaine is offered to the captain. I have never seen any, yet now, I have it right next to me. I decline, but I watch him snort some lines on my instrument control panel. He says, “get used to it… at Culver High school, it’s very popular.”

I think, what kind of school am I headed to anyway… Everyone’s higher than a kite, and we haven’t even left the ground…

I turn the controls over to Tim; at least he won’t fall asleep. I climb down and check out what’s going on around here. Since last time I was inside this facility, a lot more stuff has been stored. The Marx Brothers have  pictures of themselves on a large foam backing. You really can’t have a party without them, so there’s that.

A golf cart with a football helmet mounted on top, like at football games, is inside here. That wasn’t here before. It has a key. This is a score. I want to get chased by the Bronco in this bad ass rig, I’m thinking. I can’t get it out of here with the sliding doors locked. Shoot…

Well, I figure out forward/reverse and I step on the gas, and I am now driving a football helmet; not just any, but… the Dallas Cowboys’ helmet, with the big star logo on its sides. Everyone is tripping out, as I drive in circles back and forth, then pull up to the Time Machine.

Inside, a smoke filled game is going on. People are getting high insde, as the smoke is captured in this tiny sealed unit. You get high, whether you light up, or not. I stare inside the smoke dome from my seat in the mobil helmet. I see a girl inside, barely visible through the haze… stripping.

Wow, I have seen this capsule many times in reruns of this show, but never quite like this. A stripper capsule, sending strippers back and forth through time. If Rod Serling could see this prop now! 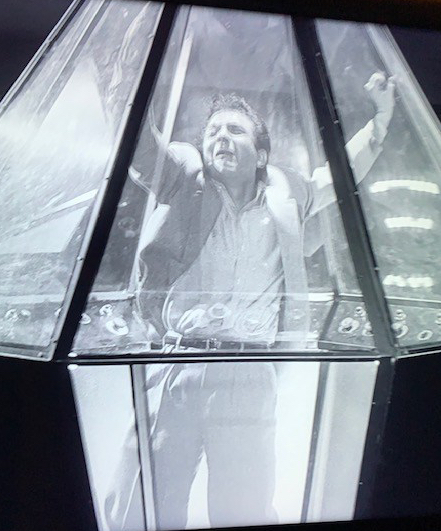 Over yonder, a space capsule on a wood platform is shaking like it wants to blast off, I can only imagine what’s going on inside.

There is so much noise we can probably be heard outside, on Overland. The public street that sits just outside, a hundred yards away. Where is MGM’s specialist guard when you need him… he must be home resting.

“Space Oddity,” by Bowie, magically plays on the radio, as people take turns inside all the fun things, like an adult amusement park.

I’m glad Maureen didn’t stick around for this… The captain calls WRAP at about 2:30 am.

I think I’m a hit in my new school and haven’t been to one class yet!

Pictured below, is Fernald on the left, a Fireman, who has been at MGM forever. Beside him, on the cart that says “Fire Dept.” is Big George, the specialist just hired to hunt me down. 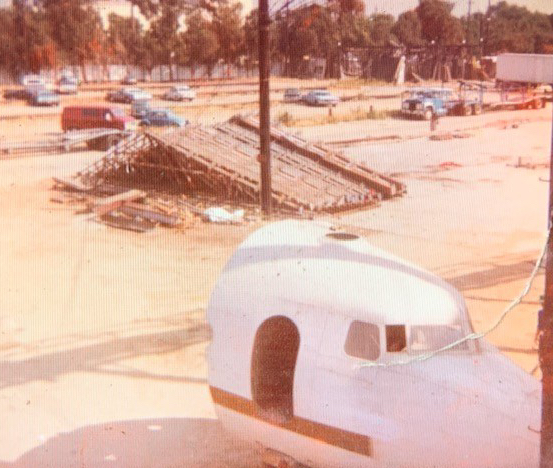 Above and below: Cockpit in its later years, on its last flight… 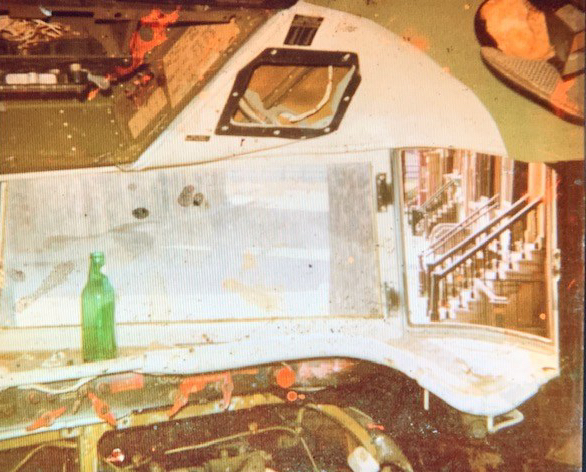 Above…. Where this green fence makes a right turn, is where this night began, climbing the barb wire pole. That green fence is the old one. We had a sharp metal fence to deal with…