Time is not on our side. This is like a noose being tightened around our necks. The police know our names and are heavily involved. Banditos Yankees… it seems like the end for Butch and Sundance, as trooper after trooper takes action. Maybe our ending will be different.

It is as if Jimmy and I are inside a huge box that is being disected. Fortunely, nightime has set in. We have to abandon our fort, knowing it will eventually be discovered. No good hiding places are presenting themselves on this rooftop. We hear the posse getting closer; they are on the level right below us. It sounds like an army. Out of ideas, and almost out of time, we look up to the sky for help, and help smiles back, in the form of a chimney.

Yes, that’s it… it has no ladder, so we need to devise a way to climb inside it. The chimney sits eight feet above the rooftop. Quickly, I have Jimmy cup his hands together, as I place my foot into our makeshift ladder. Now that I’m up, I reach down for him, and we both wiggle ourselves into this movie prop. It barely fits both of us inside, as we stand on a two by four. Fake bricks provide the cover we need. You would have to stare straight up the chute with a flash light to find us.

We see the road below, loaded with police, surrounding this entire set. No escape is possible. This is a game of hide and seek. Small pin holes in the fabricated stone allow us to look beyond the chimney, in order to watch and listen, as events unfold. Danny is being driven off to jail…. I’m like a guest at my own funeral!

We have a policeman on the roof now, with who else… Al Black. The same guy who tried pulling me off the fence last week and the reason I have stiches. Light flashes below our feet in the chimney. Al, and the police, are clearing this quadrant we are perched in… it is time for the rubber to meet the roof.

First, the policeman, standing exactly a foot away, gets on the radio and says “east roof top clear.” That moment broke the tension. We can barely contain our huge smiles; we did it! The police officer exits, while Al sits… depressed… not believing we our gone. He sits… he stares at the moon in denial, as we stare at him.

Our little hole might as well be a bank vault. This tight squeeze chimney is our shelter. We outsmarted them again. Al’s head barely moves, as he sits… and sits… and sits some more. Jimmy and I talk without speaking and laugh without laughing, like pantomimes. All the while, watching Al light up a cigarette… as he sits… and the smoke blows into our chimney. Two owls sit on the church steeple rooting for us… hoot hoot, and wondering what all of this activity is all about.

Hours have gone by and this is still Breaking News, until the police finally yell, extra loudly, “Lets get out here!”

We think it all seems suspicious… the way this is staged, like a director yelling “it’s a wrap!”

All the cars, one by one, rev their engines and leave. You couldn’t have staged a more grandiose exit. We don’t know for sure if our suspicions are correct, but we are running out of time and have already been up here for three hours. So, we climb down cautiously, one story at a time, expecting to find someone hiding. Low and behold, as we get down to the second story, a dark suit runs across a a light colored dirt road. This was police headquarters just minutes ago. We have been set up! And we took the bait! Shoot!

We hustle back to the top of this building, through all the mazes and shafts and secret ladders, all by feel and in the pitch dark. Quickly, we get back up inside our chimney.… It is like a castle turret tonight. Here come the police cars, and the bronco, and the security cart, with Al Black and Big George, both licking their chops for another round in… Most Wanted!

The only person not here is Robert Vaughn as the Man from Uncle!

Al is doing his best Richard Roundtree/Shaft impression, to say the least…

We have seen this movie and we know how it will end. They do not have any idea about us, nor our chimney hide out.

Act two begins with… “Search the rooftop again! We know they’re up there!” Hours go by… this remake is longer than the first episode.

This event started at dusk, and it has been dark forever, which feels like all night. We have no idea what time it is.

Finally… it sounds like they’re leaving, for real… it’s about time! A low profile police exit… no announcements… just a simple drive off… now go get your donuts!

We, of course, must not trust anything. Everything is a hiding place for the police, also. The tables have turned a bit, now. So, we climb down super quietly, already planning to run our course to the fence… some parts hidden, but most parts wide open.

3, 2, 1… we takeoff running, expecting God knows what. It’s like jumping out of a plane in the dark… but my guardian angel easily supplies us with an exit. 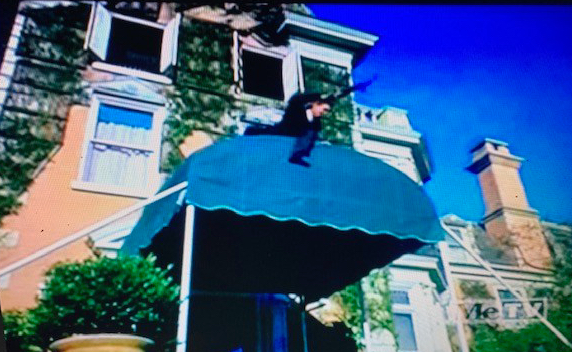 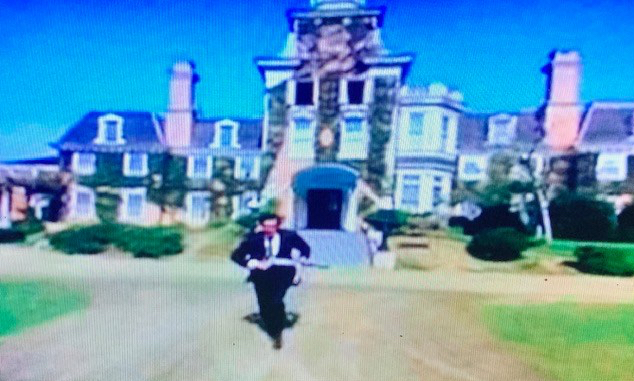 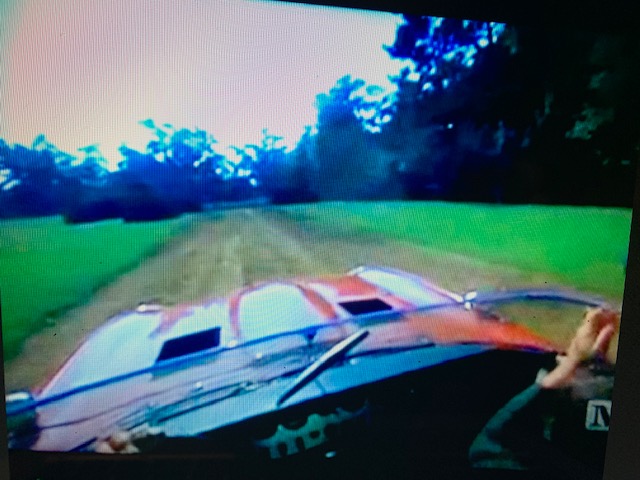 Above: pictures from Man from Uncle TV Series… The chimney on the right side is where story takes place.

We are in stunned disbelief of what just happened. How could we escape all that man power? As fun as this was, and as scary as this was, it was also very intoxicating. Trespassing is becoming very difficult… for the Most Wanted!

We end this event tonight by paying Danny “the snitch” a visit, since his bedroom light is on. Knock, knock… he answers the door with Jerry Dunphy on the 11 O”clock news on the TV behind him.

Danny responds “where have you guys been?”

“Hiding” … we both respond with mean looks and crooked eyes.

“Freedom has no clock, nor is it free!” I proudly dictate to the snitch, in my best Mark Twain.

“Funny thing is… they knew our names,” Jimmy points out.

“I had no choice…” Danny says, defensively. (The famous company line).

He continues: ”I was brought to jail and booked… my mom came and picked me up… I had two joints in my pants the entire time, at the station, which they never found, but I was so so scared!”

“We had some close moments ourselves, cry baby!” I mutter…

“OK, all is well Danny, because the chimney wouldn’t fit three anyhow.”

“See you at school tomorrow,” we say, as we all head in different directions. 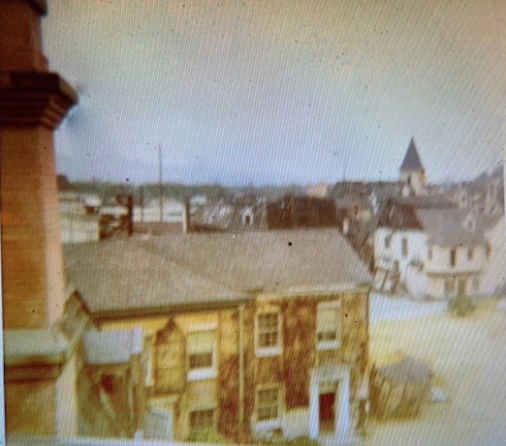 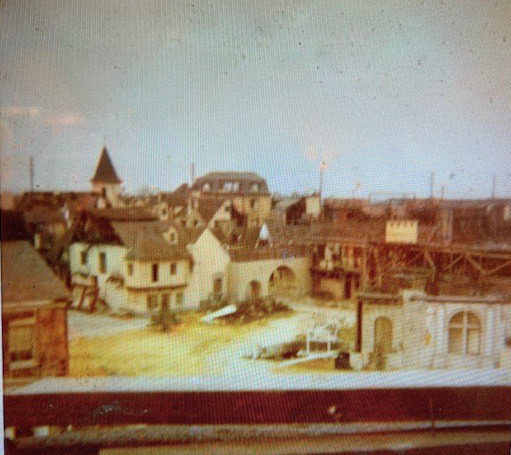 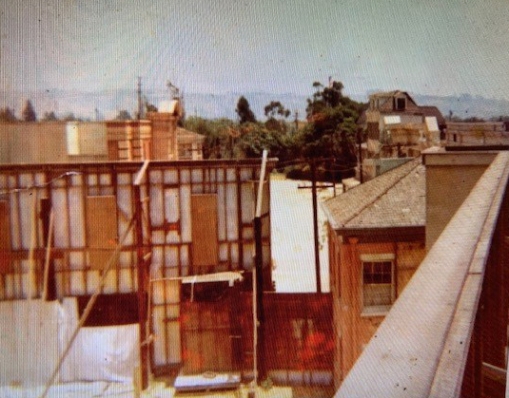 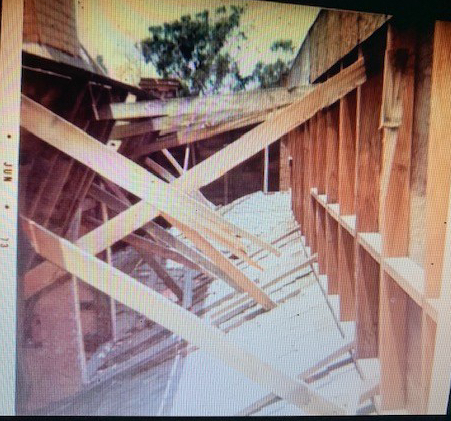 Above: These four photos show the views we have from this chimney area, top one has side of the chimney. 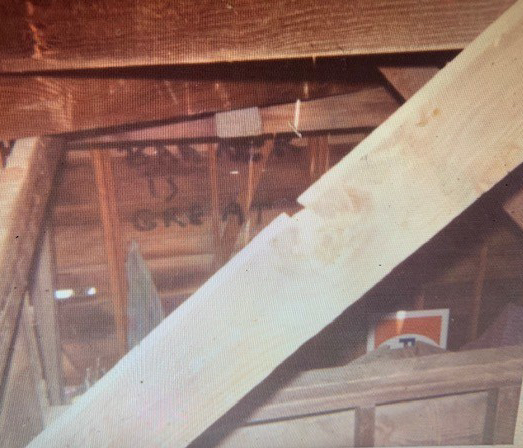 Above: The fort, as you climb through the maze. 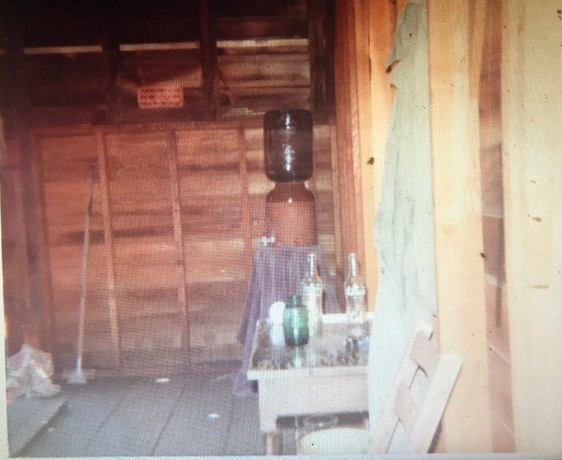 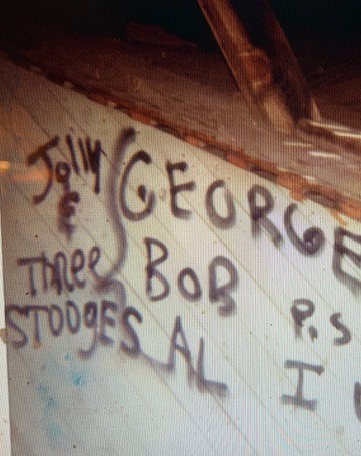 Above: A “postcard” for security, painted by Jimmy. Jolly is the Captain, who we never see… only hear about. George, Bob, and Al are our before mentioned adversaries… we know eventually this place will be discovered, so we left this little “sorry we missed you” message.