My entire life, or since I could walk without supervision anyway, I pass this old two story house almost daily. It is surrounded by a see-through chain link fence partially hidden by Oleander bushes.. Usually, a little terrier pooch runs the entire length, along side the public sidewalk, and barks at whoever is going by. It is the normal routine, for as long as I’ve ever walked this street. My dog and that dog are friends and they fraternize in between fence linkage.

Often, an old timer with his 50’s Buick in the long gated driveway is out and about also. Almost always he wears coveralls, like a care taker, a guy always ready to do something. A  pencil usually extends from his top pocket. He sometimes has a tool belt and completely reminds me of that guy in the Maple Street episode of the Twilight Zone that leaves to check on the neighbors, only to be shot by Charlie on his return home. IT’S THAT GUY. Always doing something- kinda guy…

I’ve been on his garage roof to watch the film Shaft. It was the only spot we could see over and past the bushes that were blocking us from the star Richard Roundtree. That’s until his dog figured out we were up there and wouldn’t shut up. We had to escape little Fido and his advances by slipping through a hole in the fence to escape his endless chatter, Jimmy and I had to jump off the roof to get away as an old man shouted ” who’s out there?”… The film crew had to press pause while this racket took place, it was interfering with sound. We easily relocated by traveling through yet another hole in another fence, behind the Bewitchin’ Pool. Yes, there are many holes around here, and I know them all!

I’ve never talked to this old man, just his dog. He has silently been going about his business for years, his yelling at us on the roof that night was the first thing we ever heard him say!

But- what is his business? How come he gets a house on the lot? Just-who is this guy? 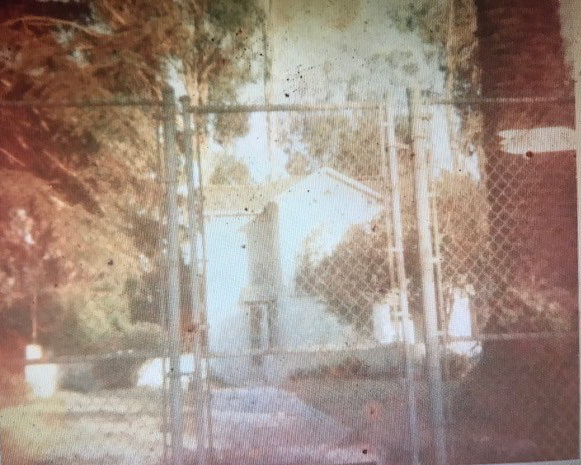 Lately though, the dog, the car in the driveway, and the old man and woman that live inside are all missing. I watched this backlot family grow old. Walking, skating, or bicycling, I constantly pass this house, including every day on the way to school. It’s located just behind Esther William’s swimming pool set. The colonial mansion is the closest MGM facade to this real life home. It has complete access to the backlot since it is in the backlot…but this structure is a real home!

Myself along with all my MGM trespass buddies realize this would be a nice addition to our ever growing studio resources, if it’s available, as it appears it is.

Jimmy and I begin reconnaissance of this area, carefully of course. Trespassing is a misdemeanor but burglary, or breaking and entering is a felony!

We walk a fine line, but that’s what we do. Being young teenagers and not age 18, helps us push the envelope. If you break the law, you need to know the law… We Do!

Bushes that help frame the studio pool also conceal this caretaker house. They provide cover that allow us to get close enough to look in the windows. We see no furniture inside, this confirms what we were hoping for…it’s abandoned!

Hoo-ray!…We nervously turn the backdoor handles, but they are locked. So too… is the front door, but luckily we find a side window is ajar. We push it open and climb inside, the one place on the backlot we have yet to explore. As we tumble inside, our fall seems softened, we happily realize that this place has wall to wall carpet. Jimmy and my eyes light up, as if it’s a magic carpet. Take us for a ride Mr Carpet.

Steppenwolf : take it from here…

We fly to the kitchen first and a refrigerator exists empty, with an old box of Arm and Hammer inside…yet, it’s on. We have power,.. this keeps on getting better, the kitchen sink has hot and cold running water. This fridge will allow storage of movie caterer’s food. Something we needed.

Answers are being provided to the questions stuck in my mind for years, this is the coolest house on the planet earth.

Next we go upstairs where three bedrooms exist, the windows look out over the pool set and all the way to the Bavarian village just used by Young Frankenstein. What a spot, it’s better than Maureen’s bedroom view. We turn the glass door knob and enter the bathroom, the toilet flushes and the shower works.

Everthing has carpet except the kitchen, the stairs have carpet going up to two upstairs, carpeted bedrooms. We have two working bathrooms, one on each floor.

Jimmy and I smile at each other, saying nothing, but thinking …everything!

We scored, an entire house, nicer than my folks place!

Carefully, we cover our tracks, going back down stairs, keeping the doors locked as we exit through the same window that we climbed in. We shut everything so it appears secured.

We leave this place the way we found it. We are so excited, full amenities, carpets, power, water, gas, and phone jacks. We will find a phone to plug in later, that’s easy…just a hot jack with tip and ring connections. A television can be watched inside here also. I have one-with rabbit ears. I’m just going home to pack my bags, I’m moving out- from Huron avenue to Arizona street.

I can’t wait to tell Maureen…”Honey, we are moving up in the world!”

Why don’t you come with me little girl… On a magic carpet ride!

Written and lived by Donnie Norden