Something big is going on in front of Boystown…

After school, Jimmy and I head over for our daily fix of Lot 2. We perch ourselves amongst the owls in the church steeple, and watch as a portable trailer carefully backs its way through a narrow passageway, while a handful of workers guide him along.

Meanwhile, studio laborers, carpenters, and a various assortment of transportation vehicles actively go about their duties, as a structure is being framed alongside one of the dirt roads that intersects in front of my fort, at Boystown.

This backlot sure has been busy, yet rumours persist that it is “For Sale.” Whatever the price, it’s worth it, I think. This wonderful, magical place is perceived as hot property for developers. Apparently, studio big shots no longer think backlots are good for filming.

Magic sure does happen here. And I now know that to make that magic happen, you need the entire area. Like one huge, blank canvas… it can be converted into anything. One world can be transformed into another… a medieval hamlet can be revamped into a space age dreamscape with a few tricks and some fairy dust. If I owned this place, I would run a tour service with trams, just like Universal does… the way I already do, as a kid!

It’s like I’m seeing into time… I know that right now, I’m sitting in an historic place that will one day, be looked back on as a legend, an iconic spot that defined an era. I feel proud to be able to call this place my stomping ground. But it’s even more than that for me. It’s like a retreat. It’s my special hideout, my place of adventures, all in one.

I feel like it’s a part of me and who I am yet to become. I couldn’t have known it yet, but it would sow the seeds of my future career as a tour guide. A bit of nostalgia wells up in me, as I see this film activity take place below me. I blow a kiss towards the MGM logo and water tower that stares back at me and the entire backlot, from the roof of Sound Stage 12, on Lot 1. There is nothing else I’d rather be doing and nowhere else I’d rather be!

Jimmy and I wander over towards a table saw, as noise from the carpenters below disguises our movements. Elton John’s “Philadelphia Freedom” is blasting from the workers’ radio, as we attempt to fit in. With occasional interuptions by DJ J.J. Jackson, we quickly recognize the station as L.A.’s KLOS.

We discover that this is a movie starring Andy Griffith, Jeff Bridges and Blythe Danner. It will use German Village for the WWI scenes, as well as this new set, that they are framing, as we speak. “It’s a hotel we’re building,” I am told by one of the carpenters, who puffs on his cigarette as he speaks over the squealing saw blade. He points while exhaling, “the blueprint’s right over there.”

“The company is at Vasquez Rocks today” he quips, as a section of wood hits the ground. “Shoots next week—it’s a cowboy movie!” My informant friend nods as he leaves, with wood under his arm. “Cool, thanks!” we wave, in appreciation.

We have watched this set grow in the usual way: building, painting, set decorations, and finally, electrical rigging. What I have learned to appreciate is the talent involved with each trade and department. For example, this hotel is brand new, yet the art department is aging it to look 100 years old. They are not just painters; they are artists.

Construction builds details only where the camera will see it, leaving vast sections blank and unfinished. Every step costs money, so departments pick and choose what is needed. These construction crews are well-oiled machines. It’s not their first rodeo, that’s for sure.

Someday, this is what I want to do… make that tomorrow, please!

After school, we arrive to machine-gun fire. An old bi-plane is being filmed, with guns a blazin’ against the backdrop of a sky. The plane sits on a gimbal, to create uneven movements and the appearance of flying.

We watch from the church first, while this village we’re in, sets up for future scenes. An Army truck is being positioned on the cobblestone street. This is an MGM show, so all the equipment has my iconic MGM symbols and logos painted somewhere on it. This increases the odds of MGM guards being present, but… that’s why we got legs! We are going on set!

We climb down from the church steeple, as set decorators put the finishing touches on my tiny village. We walk the cobblestone street, then under the arch, and position ourselves right behind camera, in the powerful director chair circle.

Director, make-up, camera, the stars Jeff and Bylthe, and… us!

We’re getting used to this and hiding in plain sight is becoming routine. Security doesn’t expect to find us this close. We have not seen any security yet, anyhow. Take advantage of the moment, or you may never get that chance again… that becomes my credo.

The loud rattle of the bi-planes’ machine guns is quite the distraction. Everyone has a hand on the side of their head, by the time this scene gets redone a few times.

When the smoke clears, there we are… next to Jeff Bridges in his WWI pilot garb. 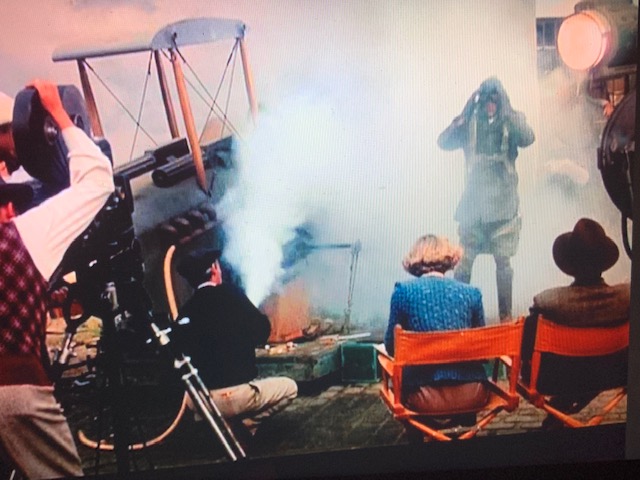 This scene is finally captured on film and we all walk towards the next set, which is the French Combat Village… We feel like we own this place!

Jimmy and I sit inside the army truck, as Jeff Bridges and Blythe Danner rehearse the next scene. Mannequins of dead soldiers are laying around the street. They even put one on the running board of the truck. We exit the vehicle when we realize we’re in the shot that’s being set up… 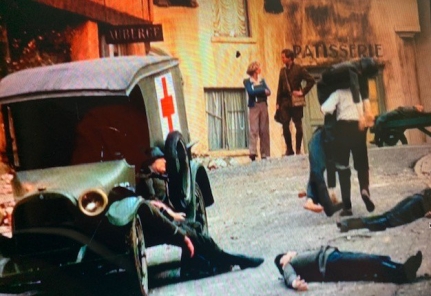 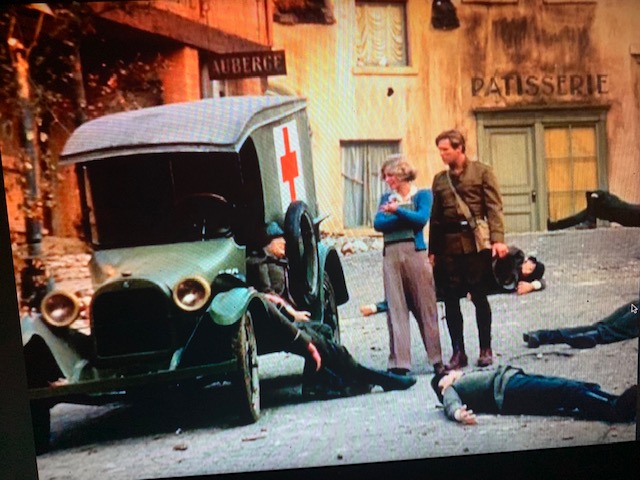 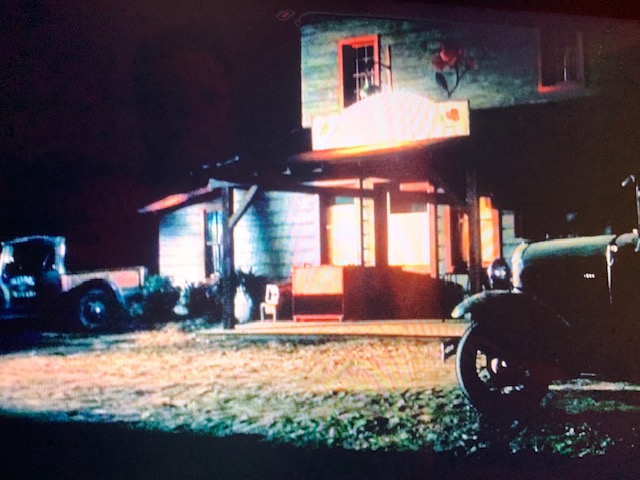 The show gets these much needed night shots at the Rose Hotel, right where this adventure started for us, just last week!

Written and lived by Donnie Norden
Edited by DQ

Don’t change the channel… A  hooky day from school—Mayberry style. Next up!

1 thought on “Hearts of the West Chapter 58”