The production office we have created at Desilu’s saloon is must see TV. Its location, dead center of an old Hollywood Ghost Town, just reeks of history. Both past and present. Desi Arnaz would be proud of this upstart company, built on his old property. He is just one of many huge movie stars that have frequented this iconic watering hole. 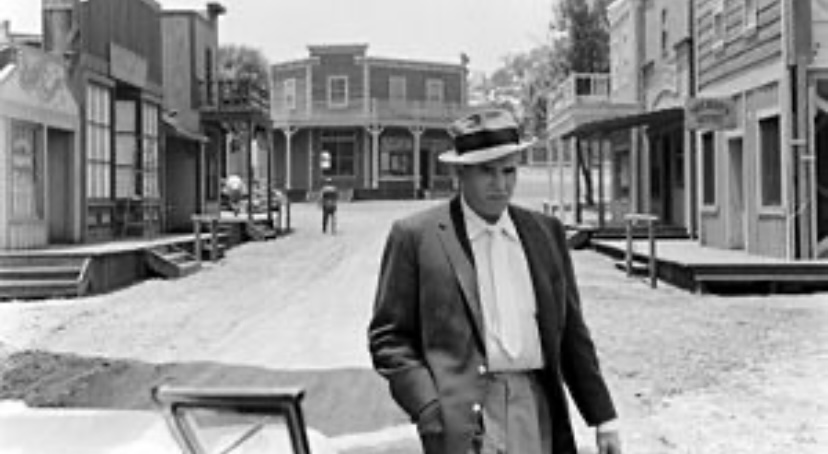 Apply in person inside the saloon at Desilu studios! Operators are standing by to assist you... (that would be me… of course).

I’m getting a lot of calls at my Huron home from many interested parties coming out of the wood work, so to speak, wanting to see our “production facility.”

In one mass swoop, I invite the whole mob, Catholic school and Public school, to an event, tonight.  Invitations only need show up… Names include Barry and Jerry Sullivan, Pat Rich, Danny Hancock, who is my next door neighbor and also the drummer in a rock and roll band. Jimmy and Gerald fill out this troupe. Gerald is affectionately nicknamed Little-shit. A name coined by MGM’s Bronco Bob, in one of his many run-ins with the shortest guy-in my neighborhood.

Ironically, Bronco Bob is the shortest security guard on the MGM force and it is quite a picture to see these two yell at each other, back and forth through a fence. It is really fun to watch those two go at it.

Tonight, we will all meet up at the saloon, around night fall. Danny wants to shop for alcohol before we ride across town. That means ask a pigeon to buy it for us. More to the point, scan the parking lot for the coolest looking person, then ask them if they will purchase alcohol for us, for a couple extra bucks. Rejection is par for the course. Like catching a fish. I watch Danny, as he works the 7/11 parking lot. He gets a bite, and a paper bag exchange is made.

I take mental notes about how this alcohol stunt is done. We open the bag in my backyard. Ronrico Bacardi 151 proof, and Jack Daniels 80 proof. I ask Danny what these numbers mean and his reply is that the higher the number, the higher you get… Makes sense, I suppose.

We triple brown bag it before we leave my house, so that these bottles don’t fall out. My Mom is at church, playing Bingo. My Dad is at work, driving the Big Blue Bus, along the beach, in Venice. I’m just a free bird.

Pat and the Sullivan boys are already upstairs at the saloon. A posse consisting of Jimmy, Danny and “The Sundance kid” (yours truly), ride into town together on bicycles, as the sun sets in the old west.

It turns out the Catholic boys have been dialing away, on the studio hot line, all over the USA… for over an hour already.

Yes, long distance is included in this package. Everyone is excited. I elevate my voice to take command of my troupe: “you can’t have a World Headquarters with out long distance… what did you expect?… First class all the way!”

While I’m talking, Danny is ripping open the paper bags with the whiskey and rum. The Sullivans also brought alcohol, Old Engish 800… tall cans, of course… Two of them sit open on top of our wooden whiskey drums. Figures… those British blokes! Blimey…

I check to see if the main gate is open, but all employees, it appears, have started their weekend. No pizza can be delivered through this gate tonight, unless we meet the delivery man outside the main gate on Ince or better yet, just have him slip it under the main gate fence. I’m covering all my bases, as a producer and director must.

Before we get louder, I take a walk to make sure security is not sitting at the rolling tool shed and lumber pile that sits where Stalag 13 once did. A sheriff would probably hear this large mob.

I gotta stay two steps ahead at all times. We might be falling into a trap. But, all seems clear. All clear here… the lot is ours… let the casting begin. I return to the office and smell a strong aroma of pot, filling the air. Older guys party hard, I observe.

This is what it’s like to make a movie in Hollywood, I guess… lots of smoking, and drinking, and shouting and laughing. Like a poker game.

I puff on a joint like its second nature and randomly spin the my rotary phone dial. I dial area codes to who knows where. Like a pot luck… pardon the pun.

A woman picks up on the other end.

“Hello?” I identify myself as a casting agent at a major Hollywood studio. “We are currently casting for a female actress to co star in an upcoming feature to be filmed here in Hollywood.”

I ask her name as she stays on the line…”Lisa,” she cordially replies, as all my drunken cohorts pull their chairs in closer to try to get a listen in… “well Lisa, my pleasure to speak to you this evening, what city would you be located in?” “New York City,” she answers.

Bingo! The big apple, I think a million thoughts… yet, I stay cool, calm, and collected.

“Well, can you describe yourself a bit?” Before letting her speak, I mention we are looking for a woman in her twenties… with a curved figure… medium to large breasts… The part being casted is for a wench, set in the old west. We’re trying not to let our laughter escape.

Click. Dial tone. She hung up. Cross her off the list. “Your turn, Gerald,” as I roll the phone his way. This repeats itself, for hours on end.

My turn again. I get a female on the line. I start the spiel about a Hollywood film with an open casting call and quickly get interrupted by a raspy voice, “Don’t ya think it’s a little late to be calling about a movie extra part? … You sound like a drunk teenager…” she continues to blast me.

I snap back… “It’s never to late to find talent… this is a 24/7 business!” And with a flimsy “goodnight,” I quickly slam the phone back on its cradle, as my friends bust a nut. My friends all chime in, “what did she say to you?” I am flustered and simply retort… “I could tell I can’t work with her type.”

I am bewildered... how did this happen… it was as if she could see me… she chopped me up like a Samurai.

I follow this conversation, by taking my biggest swig yet, of the Jack Daniels in front of me.

One crazy conversation after another. Pot smoke, along with cigarettes, fills the air. We have a tiny candle on top of the whiskey barrel that dimly illuminates our shit faced expressions, along with the cloud of smoke that hovers above.

My older, lightweight friends start passing out, one by one, and the cots fill up quickly. Luckily, there are plenty more downstairs. My buzz is mostly adrenaline. I sit in amazement, trippin out on what we have accomplished, so far. This is always how I pictured Hollywood movies being made.

I take a couple of swigs out of the whiskey bottle, as it passes in front of me and quickly follow each one with a 7-up chaser. Now, I realize why we brought these green cans. 7-up works with whiskey. Coke works with rum. I am taking a crash course on growing up tonight.

Barbara is on the phone in Chicago and is very interested in this role. I identify myself once again as a casting agent for Hole in the Wall Productions, based in Hollywood and ask her directly, “do you have the look of a wench? Specifically… a curved body with big breasts?” She says, “Yes, I do… I am an exotic dancer at the Playboy Club here in Chicago.” With each sip, I get more bold and brazen.

“Bingo,” I quietly shout… as my crew drools.

She asks if airfare is included to Los Angeles.” I reply, “if you are hired, we will reimburse all the airfare. “

She continues bartering the airfare, and expects a hotel… she wants in, but… we can’t agree to terms.

I barely have pizza money. I can only imagine what this phone bill will cost. Thank God I am an executive… we get perks!

The female costar will probably be Maureen, anyway… if she will take it. She will work for scale, I’m pretty sure. Let’s call her and see if she’s home and has interest in costarring… beep, beep, beep. Her line is busy.

If I go home tonight, I will go tap on her window.  I may just sleep up here tonight, in my office.

I am realizing just how gullible many women are… Yes, I am at a Hollywood studio. Yes, we are imposters. Women really seem into this Hollywood shit, and buy practically everything I have to sell.

Many women stay on the line, attentively describing their assets, as we become more polished with each and every call… at BULLSHIT!

You simply tell them what they want to hear, promise them everything but deliver on nothing. Create an illusion… I am starting to understand this Hollywood business.

When men answer, we hang up.

All I know is… I’m a 13 year old smooth talker, who is presenting himself as a young casting director, with a long distance line at a major studio. This is what I do… Who needs school, anyway? I’ve made tremendous strides in just a short period of time in the film business. In class, my tires just spin in the mud.

My last call of the night is to my Mom, as my head spins in the opposite direction of the phone dial. “I’m safe and sound and will be staying at Pat’s house tonight.” I ask her what she’s up to, so as to beat her to the punch. “Just watching Johnny Carson,” she says, before continuing… “I was going to make you a tuna sandwich if you were coming home.”

“I’ll take a rain check on that! … by the way,  how was Bingo night?” I ask, as I imagine a tuna sandwich in front of me… I can almost see it and taste it, as if it were right there, next to the empty whiskey bottle.

“You have fun celebrating, Mom, you earned it.’

Little does she know, I’ve been celebrating all night, also…

As Gene Autry put it best: “I’m Back in the saddle again!”