This new specialist that MGM hired, just to get me is disturbing. Life on the Backlots has been progressing  just swimmingly up until now. A large speed bump is now in place. But, I have more experience than him, on the MGM backlot, and I know every building and bush, intimately.

Advantage Donnie, but due dilligence is still needed to find dirt on this specialist guy, named George.

Jimmy and I begin our detective work on this matter, the very next day. We begin by canvasing the neighborhood in which he lives. Gertrude, the old lady who lives next door to him, is out watering her yard. I politely ask “Hi, do you know George next door?”

Above: George’s house, a block away from mine, and the MGM backlot.

Gertrude responds, “Sure, I watched him grow up… how do you know him?” I respond, “I ran into him at MGM. He is a security guard.”

“Oh he is”… (short pause). “He always wanted to be a cop… he tried for Culver City P.D., but he was too large to fit in the police cruisers,” she giggles.

I speak, “Well, MGM got him a big, old jeep to drive around in, so he can pretend to be a cop,” as we both laugh.

“He never had many friends… kinda a loner”…”Yep, I snap. “Now he’s the Lone Ranger at MGM…  he traded his white pony for a red Bronco!”

“Does he still live here at home?” I keep rattling on… “Sure does, that’s his van over there,” as she points.

“Cool, I will visit with him later!”  thanks Gertrude.

I ponder… He could be looking at me right now, as I gather info. Yet, he has no idea about my name, appearance, or address. He still thinks my name is John… like that Dillinger guy. He can’t even get first names right…  Score Donnie: 3, George: minus 1.

MGM now has two guards, Ron and George, that are big enough to play on the LA Rams Fearsome Foursome.

Okay, this was a coup of info. Now we know his vehicle and when he is home… or at work. Next, I need to watch his tactics while on duty. Backlot homework is required. He is on the night shift, so I will observe him from the highest vantage points the lot has to offer.

The German village church, offers tremendous views, all easy to get to. And a man his size cannot squeeze up this climb to the top of the belfry. What we see patrolling is one gung ho dude. Drives with lights off, speeds around, gets out and walks into buildings. Very disconcerting to James and I.

I take precautions on the lot now… less wandering, and more hiding. We have a network of peep holes in the fence surrounding the lot… many we struck ourselves. Strategically placed to observe the backlot safely, from the outside, looking in. These knot holes have never been so handy.

Late last evening, I was patrolling… looking for him. I peered through a hole that looks down Brownstone street, which is part of New York street. I arrive just in time to see the Bronco, lights off, rolling slowly down this slum. When the Bronco comes to a stop, the Jeep is staring at me but the occupant has no clue I’m watching him through a tiny hole.

I am not sure it’s George until the door opens. Oops… make that both car doors open. A big silhouette exits the driver side on this pitch dark street. And a short, stocky figure exits the passenger side. It’s Bronco Bob himself.

I can hear them talk, as they turn on their flashlights and raid a New York warehouse. The garage they are inside of was used in SAINT VALENTINE”S DAY MASSACRE. This is where the bloody carnage took place in that 1967 Roger Corman classic. 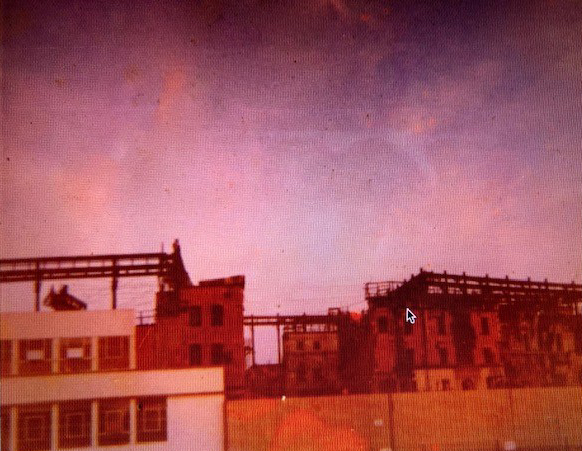 Above: The tall buiding on the left side, is the set I am describing, as viewed from the crew parking lot. Peep holes exist all over these fences

Also, Laurel and Hardy filmed many scenes on that exact spot – the same one they’re now securing.  In Air Raid Wardens, a dump truck dropped a load of dirt on Oliver Hardy, right where the Bronco sits. These two unlikely looking figures look just like those legendary stars. The size difference is even more ridiculous with these two goofballs.

Beams of light shoot out erratically through the many orifices this five story building has to offer. George’s partner tonight, is the most hated guard on the force… and he’s Pat’s shooter!

Maybe Bob is training him in… firearms.

MGM teamed these two up, oh shit, I think… Yipes, I need to tell Jimmy. Now!

The bar has been raised around here in an effort to capture Public Enemy# 1.

Jimmy and I now routinely patrol one side of the fenced propery as these two patrol the other side.

Tonight we roll up on every hole we’ve got… peeking in, when I suddenly notice a large figure on top of a second story stairway, completely within view and unprotected, by walls or cover. He is looking out the opposite way, overlooking the lot, and is completely oblivious that we see him. I point upwards at him, and we take a good look at MGM’s specialist.

Above: This is our side of the fence this evening, stairway just out of view, to the right.

I signal to Jimmy let’s go, as we sneak away to briefly discuss this unprecedented opportunity. We are on the legal side. He does not see us. He makes a tempting target.

We don’t have BB guns with us, but a lemon tree poses next to this pow wow we are now having.

“Well, these will have to do,” I say. We start picking these yellow fruit projectiles. As fast as we can, we stuff these hard yellow balls in our now bulging pockets. Lastly, I pick two very rotten ones off the ground… just to make a mess of the target. These two will be launched first. Jimmy loads up, also.

Game time—We leave our bikes next to the lemon tree and walk out of view, back to our target. He is still there. Twenty feet away. We both are extremely good at throwing.  Jimmy is a little league baseball star. I’m a quarterback in a Catholic prison.

We position ourselves, and we communicate with our eyes. With a nod of my head and a wink of the eye, we open fire!

First shot is money, rotten money, and the first sound is a double splat. The gushy lemons are direct hits. George looks down at the villain he is being paid to apprehend.

Frantically, as we continue to fire away, sounds change, as the harder lemons are tossed. There is a “clunk” sound when you miss and hit wood. But a “thump,” followed by a grunt means a strike of flesh. He ducks for cover but this roof offers none. He must go back down the stairway he came up on. We are now throwing the hardest lemons of the batch, and I put mustard on these babys!...

We pelt this large, blonde, behemoth to no end. He continues to take a beating, as he almost tumbles down the stairs. Like a Bull Fight coming to its inevitable ending.

What fun we have. Well, we had to meet this specialist, sooner or later. You just got a taste of what you signed up for, George… Sorry if it was a bit sour!

Put a badge on the guy below and this picture sequence comes to life… as things went down that night!

If you are keeping score Donnie: four. George: minus one…